Some thoughts about pedantry 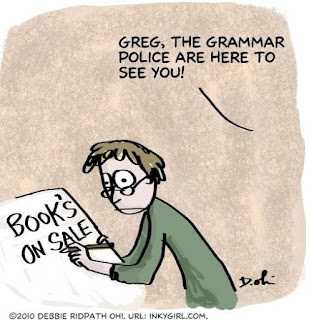 Pedants enjoy deprecating 'bad' uses of English. I am myself one such, acutely aware of 'correct' and 'incorrect' language.

I was brought up, for example, to believe that the word 'deprecate' meant to curse or abominate, and that 'deprecate' was often wrongly used when 'depreciate,' to belittle, was intended. I had a vision of cursing with bell, book and candle.

Now, however, the Oxford Dictionary, while acknowledging that the origin of 'deprecate' is from roots meaning 'to pray against,' states that it means 'to express disapproval of' or 'to depreciate.' Another piece of pedantry dies, like dried seaweed on the shore of usage.

As has always been the case, language mutates and diverges. An early English king had to send an interpreter to accompany a mission to Northumbria. Reality TV, Facebook and the fact that English is no longer the official language of just one island mean that we have the conditions in which the only things holding the English language together are precisely the media in which all its variations are expressed.

Might I recommend David Crystal's very entertaining The Stories of English? Some patterns of speech deprecated in their time are now normal even for pedants, and the earlier preferred alternatives sound stilted or odd.

Crystal argues that in Chaucer no single regional accent had more prestige than another. The precedence of Received Pronunciation I think has to do with political and commercial power being centred in the South East of England, the dominance of the Midlands during the Industrial Revolution not having lasted long enough to make more northern accents associated with power and success. Needless to say there are many regional dialects such as in the Caribbean that have never had prestige despite having their own poets.

It is worth remembering that Chaucer was himself establishing an underdog language (English) as an acceptable vehicle for serious literature, and Robert Burns tried to do the same for Scots English.

The function of language is to convey meaning. If it does so unambiguously then one can argue that it has done its job. If Shakespeare bent the rules it was probably because he was looking for a particular effect on the ear, and that has to do with the music of language. Some scholars have suggested that early pre-humans might have sung rather than spoken, and it is also the case that we hear repeated spoken phrases as music, so the effect of language is both to convey meaning and to convey a feeling.

If we are looking for quality in language then we need to look beyond what happens to be fashionably 'correct' in our small corner of the vast English-speaking world. Rather we need to write and speak for clarity, and for the all the techniques of rhythm, assonance and rhetoric that make language a pleasure to read and to hear.

Meanwhile the majestically protean English language ebbs and flows leaving us mere pedants behind like bleached driftwood in the littoral zone.