Ethereum - don't do what I did

Ethereum, Bitcoin and other cryptocurrencies are increasingly in the news. You may see in this an opportunity to get in on something that may turn out to be big (or all manner of mishaps may happen to it). However it's interesting enough to put an amount of money into it that wouldn't hurt you much if you lost it all.

Ethereum is interesting because it's not just an alternative currency (although it has value), it's a platform on which what are called 'smart contracts' are written. The idea is to write contracts in code on top of the blockchain (ethereum's existing distributed ledger) making contracts enforceable automatically and (presumably) avoiding the necessity of going to law in the case of disputes. That is, both the rules and the execution of the contract are encoded, and the code is tamper-proof, so no external arbitration is required. That's the theory anyway, and it does depend crucially on the code not having exploitable loopholes.

Anyway, long story short, it might be a good although high-risk investment. In my naivete I went to the official site at https://ethereum.org/ on the basis that this is all new and there are no doubt some scams out there, so might as well go to the source. If you scroll down you will see that you can download the wallet free. A wallet is somewhere you can keep cryptocurrencies. Using the wallet I purchased a modest quantity of ether (the cryptocurrency). From my experience with Bitcoin I did not expect the amount to show up in my wallet immediately, as these things generally take between a few minutes and an hour. I ran the thing day and night from 11 September until I gave up on 9 October and my ether still did not appear in my wallet. This was because the software was still trying to synchronise with the entire blockchain.

At various points I went to the user community discussion forum discussing this very problem. Although people were mostly kind I was told more than once that this was not the correct forum. I could not understand why people were spending any time on this piece of software that clearly wasn't working for any of them. Anyway I persisted and eventually a user gave me enough information to rescue my ether to the point where if I want to convert them back to regular money I probably can.

So if any of this makes any sense to any of you, take heed, and if you want to play around with this, don't invest a lot of money in it until you understand what you are doing.

How to get spiritual understanding: Mark 7:28 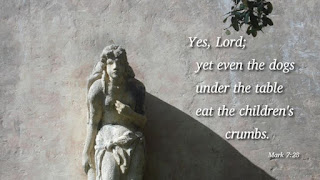 "For a certain woman, whose young daughter had an unclean spirit, heard of him, and came and fell at his feet: The woman was a Greek, a Syrophenician by nation; and she besought him that he would cast forth the devil out of her daughter. But Jesus said unto her, Let the children first be filled: for it is not meet to take the children's bread, and to cast it unto the dogs. Mark 7:28 And she answered and said unto him, Yes, Lord: yet the dogs under the table eat of the children's crumbs. And he said unto her, For this saying go thy way; the devil is gone out of thy daughter."

This is remarkable. The woman was given a hard answer, but she didn't give up. That's how humble we (i) need to be to get spiritual understanding.

More about Bitcoin and cryptocurrencies

I do not know enough to pontificate, so what I write about this is a guess (please contradict if you wish).

Big institutions including governments are looking into cryptos and blockchain technology (not necessarily the same thing) for their own reasons. But that doesn't mean that an independent cryptocurrency such as Bitcoin would not continue and indeed prosper. In the long term that means people being able to buy things and services with it.

In the pipeline are systems that will allow contactless payment much like Applepay but with Bitcoin, with virtual debit cards loaded from Bitcoin accounts by the user. It could be attractive for at least two reasons: (1) being able to access foreign currency when abroad without having to pay exorbitant fees and spreads on currency exchange; (2) having a store of value that would not depreciate significantly in an inflationary crisis.

Once people start actually using Bitcoin for purchases its value might well stabilise, or at least become less volatile, as now I presume the volatility is largely driven by speculation. The threats as I see them are (1) most of the Bitcoin mining takes place in China, where electricity is relatively cheap. This problem will not go away until we have quantum computing, and of course then we have to hope that someone will redesign the blockchain technology to make it tamper-proof again; (2) the unresolved speed/ capacity problem. On the up side, given Bitcoin's ultimately limited supply, if it does not collapse then the value will ultimately rise - quite a lot.
No comments:

They're not looking at you 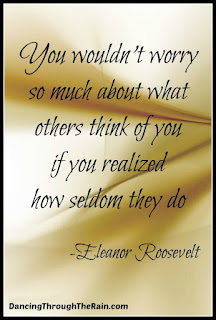 (Occasionally I have thoughts that might actually be useful to someone.)

Usually they're not. Usually they are worried about what you think about them.

Learn not to care about what other people might think about you. Do what's right, keep doing your best, forgive yourself mistakes and keep going. Other people will come around in their own time. 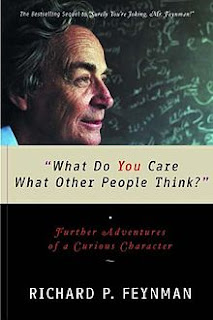