The limitations of reason 2

Consider in any case that reason starts from premises, and premises come from experience. Reason itself generates nothing new - it merely re-arranges things in law-conformable patterns.

I should like you to indulge me in a thought experiment. Suppose it is the case that there is a world beyond or even prior to reason. Suppose further that you are someone who habitually interprets the world through reason. You test every claim and hypothesis against reason.

There is, I would emphasize, nothing wrong with that. There is a great deal to be said for pointing out contradictions and requiring evidence, especially for dangerous, tendentious and unpleasant opinions. There is, in effect, a proper use of reason and a proper realm in which it operates.

However, if you are such a person you may find it difficult to conceive of anything outside the reasoning world. You would be like the cartographer of old who leaves a blank where definite knowledge ends, or perhaps fills it with mermaids and fantastic creatures, or writes, 'here be tygers.' Although more usually these days it is those wedded to reason who insist on not merely leaving a blank but insisting that there is nothing there or that reason will one day fill the blank, given more research. Whereas it is those opposed to reason or who do not value it who fill the blanks with sirens of their own invention.

If reason is a game of chess, what do the pawns or even the kings and queens know of the world beyond the chequered squares? Reason cannot reason about that which is outside the world of that which can be reasoned about. It is impossible, like a Flatlander trying to point to the third dimension.

Price slashed by Amazon for 'A Mermaid in the Bath'

I see that Amazon has slashed the price of 'A Mermaid in the Bath' from £8.00 to £6.17, at least on Amazon.co.uk, and $10.99 on Amazon.com. Buy now while you still can at these bargain prices (you know you want to). The book has fishy printer's ornaments consisting of mermaids, fish, starfish, jellyfish, crabs, coelocanths and union jack boxer shorts, and a lovely mermaid in a circle and square opposite chapter 44. And quite a lot of jokes. Go on, go on! 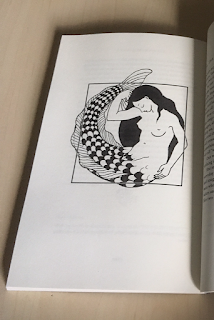 Email ThisBlogThis!Share to TwitterShare to FacebookShare to Pinterest
Labels: A Mermaid in the Bath, Amazon, price slash

The limitations of reason

In one of Carlos Castaneda's books, perhaps A Separate Reality but I don't recall for certain, Carlos has a conversation with his shaman teacher Don Juan Matus, in which Don Juan explains reality in terms of the contents of a small table.

He is attempting to explain two terms, the Tonal and the Nagual. I have read since that anthropologists dispute that Yaqui shamans use these terms in the way Castaneda has Don Juan explain them and some have claimed that Castaneda never went to Mexico and that Don Juan himself is a fabrication. In any event my own memory of A Separate Reality may be faulty and I have not checked, nor do I possess a copy any more. None of this really matters for the purpose of this essay, which is about how we experience reality and the limitations of reason in apprehending reality.

The explanation went like this. See the contents of this breakfast table. There is a table cloth (for some reason I remember a gingham check-pattern plastic table cloth, but that is probably my fabrication) on which are plates, perhaps salt and pepper shakers, knives and forks and so on. I imagine sunshine on the table cloth - perhaps this is a humble breakfast on a day in which there is no hurry. Again, the details are not important. Don Juan explains that the table top and everything on it represents the Tonal. The Tonal is the normal everyday world (although even this description needs to be qualified). The Nagual is everything else.

At first I wrote that the Tonal is the world of our everyday perceptions, but that is not right. The world of everyday perceptions is extraordinary and is not the world we usually inhabit. Rather we live in a world constructed out of thoughts and ideas. In any event, as I understand it the contents of the table top represent the realm of things we can talk about, and what we can talk about we can also reason about.

Somewhere in Swift's Gulliver's Travels is a description of two philosophers meeting for a discussion. Instead of using words they bring along a large number of disparate objects (kettles, armchairs and so on) and dispute with those. Now clearly that is a bit impractical. That is why we use words instead. If I wish to tell you about an elephant it is very inconvenient to bring an elephant into the room, and although people talk about elephants in rooms quite a lot, there is rarely a real elephant there.

So over perhaps tens of thousands of years, perhaps longer, humans have built up vocabularies of words and signs to refer to things and to states of affairs. The words stand in place of the reality. Words, ideas, images build up to form an internal representation of reality, and these representations are necessarily different from one person to the next, although there will of course be large overlaps and similarities (otherwise communication would be impossible).

While this is all very convenient it also distances us from the reality of our immediate perceptions. We see a tree, and instead of marvelling at its size, structure, the way the light catches innumerable leaves, the way it rustles, it is as if we only see the label, 'tree.' The same can happen with our interactions with each other, and with every mundane event. The label is fitted into our internal map of the world, which is as much like the real world as Google maps is to the town you live in, that is, it is and is not. It is in fact not merely a map but an internal monologue that replaces much of reality, so that it is as if we were wearing virtual reality goggles all the time through which we can see a dim representation of the real world as through a glass, darkly (1 Corinthians 13:12).

It is the world of words and ideas that we can reason about. Everything else belongs to the Nagual. That does not of course entitle us to make bold unsupported assertions about anything. Any assertion can be reasoned about, challenged, disputed. All one can do with things that cannot be reasoned about is make poetry, art, dance or drama in order to try to resonate with that within us that knows already.

As Simon and Garfunkel sang:

Because a vision softly creeping
Left its seeds while I was sleeping
And the vision that was planted in my brain
Still remains
Within the sound of silence
[...]
And the people bowed and prayed
To the neon god they made
And the sign flashed out its warning
In the words that it was forming
And the sign said:
"The words of the prophets are
Written on the subway walls
And tenement halls
And whispered in the sound of silence."

... when the mind catches up with our feet. Suddenly we're there. Then we're not again. It is a mystery.
No comments:

What will the president do or say next? It's a rather compelling soap opera, like the Real Housewives of wherever, where one is momentarily fascinated by shallowness out of control. It is tragedy with a veneer of glitz.

Are we not shallow also, when mesmerised by events entirely outside our control?

Stuff happens, especially when some of the most powerful rulers in the world are fast asleep.

This fellow who calls himself the Happy Philosopher says it rather well. Don't listen to the media.

Anxiety, despair, fascination butter no parsnips. Remember the six handshakes theory? We are each connected to everyone on the planet by no more than six handshakes. What can we do? Carry on being ourselves, and making ourselves be and act the best we can. Be in the moment and be aware of others' needs. Look and listen more and talk less. Assume the best of each person we meet until proven otherwise. Make every moment the beginning of a new creation.

That is real power, and it will still be yours when the strange people in charge are replaced (hopefully by a peaceful democratic process) by other strange people.
No comments: