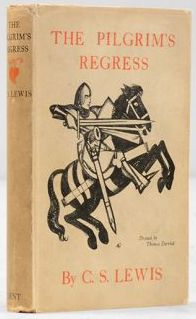 Is it possible to change merely by hearing the word spoken?

The suggestion in C.S.Lewis's allegory The Pilgrim's Regress is that the quick way across the ravine from the intellectual desert of the 20th century to the island paradise is by Old Mother Kirk, in other words, the Church. But for some reason the hero, John, does not take that route.

The island paradise is glimpsed by John towards the beginning of the book. This island paradise is not a mere fantasy or daydream, rather it is a glimpse of the truth. Its nature is not defined, but I take it to mean the real Self, the heart of the world, the still small voice. John has a memory of reality. As you can see, my own ability to describe it in words fails, because it is one of those things that is prior to words, as I have discussed previously here and here.

My feeling is that simply hearing the word spoken is not enough - we must strive to understand it and to put it into practice. No amount of theoretical understanding about the chemistry and techniques of cooking can make us into chefs nor can a Haynes manual make us into car mechanics - we have to get our hands dirty and do it. The theory helps of course and is often essential, but it is nothing without practice. That is where real understanding comes from.

Yet hearing a sacred text spoken at least opens up thought, often a thought more useful than the many thoughts that come from other sources. And if we see something different in the text than is in the sermon, that too can be useful.

We are bombarded with thoughts and opinions, many of them without merit, mere opinion based on nothing. Some of these impressions are simply nasty, not something we would wish to become. Our mental and emotional lives are made of the stuff which we allow to come into us. To put ourselves in the way of hearing and seeing something better, whether at church or elsewhere, must change us.